Long ago, back in my bachelor days, I had built some 8-bit NES sprites out of Lego and hung them on the wall. Recently, my wife asked me, “What happened to those?” and “Why did you never hang them up here?” She doesn’t realize it, but she just gave me permission to nerd out for the next few weekends. 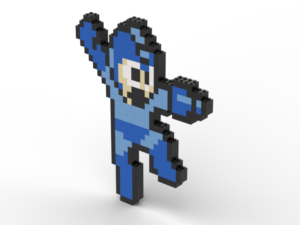 This weekend I pulled out the old Legos and learned more than I expected. The Megaman model used in this post is shared on Bricklink’s Studio.

When I first did this project I simply searched for sprites on the web, then cobbled together something that would stay together well enough for the Legos I had available. I can do better. These things are fun, but had three major problems.

I came up with solutions for all these issues, but in the end decided only he first two were worth fixing.

Making these sturdier is where Studio comes in. This is one of the easier 3D modeling programs I’ve used. The interface is simple–similar to Sketchup. By the time you’re done with the simple snail tutorial you’re pretty much good to go. Admittedly NES sprites are simple, so I can’t give a through review. What really impressed me was how easy it was to make instructions and render high quality images. Also, it’s free, but not open source (a little disappointing).

I stared with Megaman, because he’s freakin’ cool, and started building in Studio. One of the first buttons I found is called Stability. I cannot comment on its accuracy, but it is neat to see potential issues. One of my few complaints about Studio is there wasn’t anything to explain what the stability cautions and warnings are measuring. Megaman version 2.0 is significantly stronger than the original.

Here is a screenshot of Megaman’s stability view. No idea what this pink means. 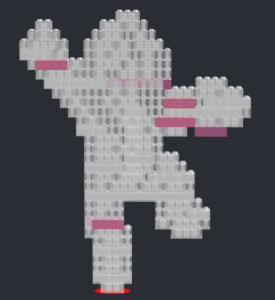 The most obvious advantage here is I’m not limited to the Legos in my box. Most of Megaman’s rigidity comes from long 1xN pieces. I also tried to build in such a way it would only require the cheap basic bricks.

Modeling helped with a better mounting bracket too (the second issue). This time I wanted to use command strips instead of the nails I used the first time. I didn’t want to attach the command strip directly to Megaman. I added some brackets to hold the sprite off the wall (the shadow makes for an awesome look) and a 2×10 plate is a good size for the large command strips. 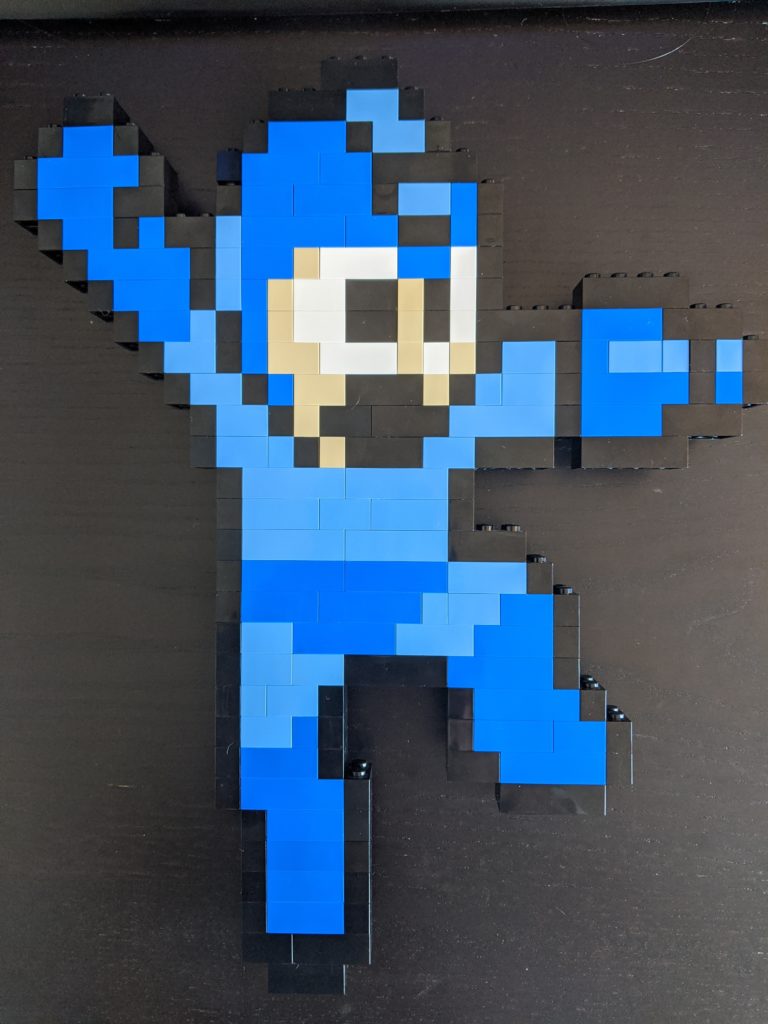 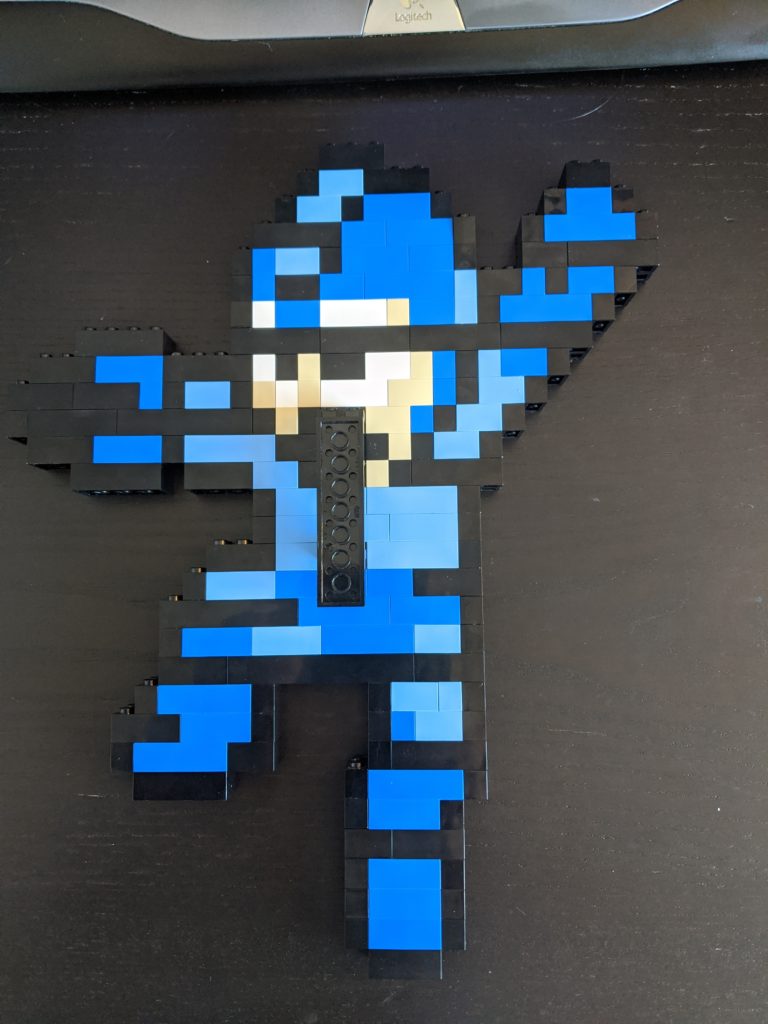 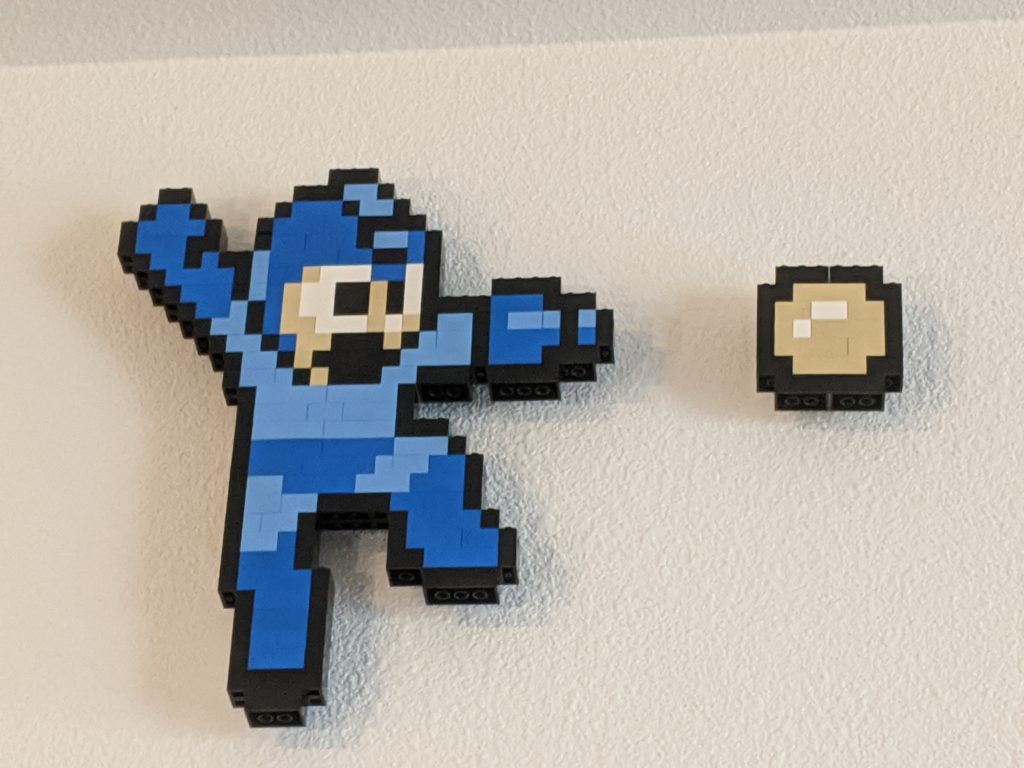 Even having to sub out some of the long support pieces, version 2 was pretty sturdy. I plan to replace them with parts from bricklink.

For the last issue, aspect ratio, the core problem is pixels are a 1:1 ratio (caption obvious strikes) and 1×1 Lego bricks sides have a 2:5 ratio. There are a couple of ways to fix this. The image blow shows three Megaman bullets; the first is the current build style, the other two are aspect ratio corrections.

The first option changes the orientation so the studs face out. This is the middle Megaman bullet in the image. This works because the top of a 1×1 brick is square, like a pixel. It has the advantage of not needing to change stud orientation for mounting. It’s a simple solution, but I don’t like the look.

The second option, and third bullet in the image, is to correct the 2:5 ratio with plates. Because the bricks are too tall for their width, to bring them to 1:1 we have to double the width first then add two plates. A 2×2 brick is the same width as 5 plates stacked up (a brick with 2 plates is the same as 5 plates). Without diving into more Lego math, it works. It also gains a sturdiness advantage because it gives more staggering options. This method has a few down sides that kept me away from it. One is it drives the complexity, part count, and cost up. Another is it’s kind of ugly. Granted beauty is the eye of the beholder, and there are probably things that could be done to make it better… I didn’t experiment beyond making this bullet. Finally, it increases the size. Megaman’s current width is a tad over 9 inches. This would double his width to over 18 inches. Height-wise he would go from 11.5 inches to just over 19 inches. I’ll consider this for version 3 if I have more wall space and budget.

While I wait on Lego parts to arrive in the mail I can start on Mario. Poor guy needs some help. 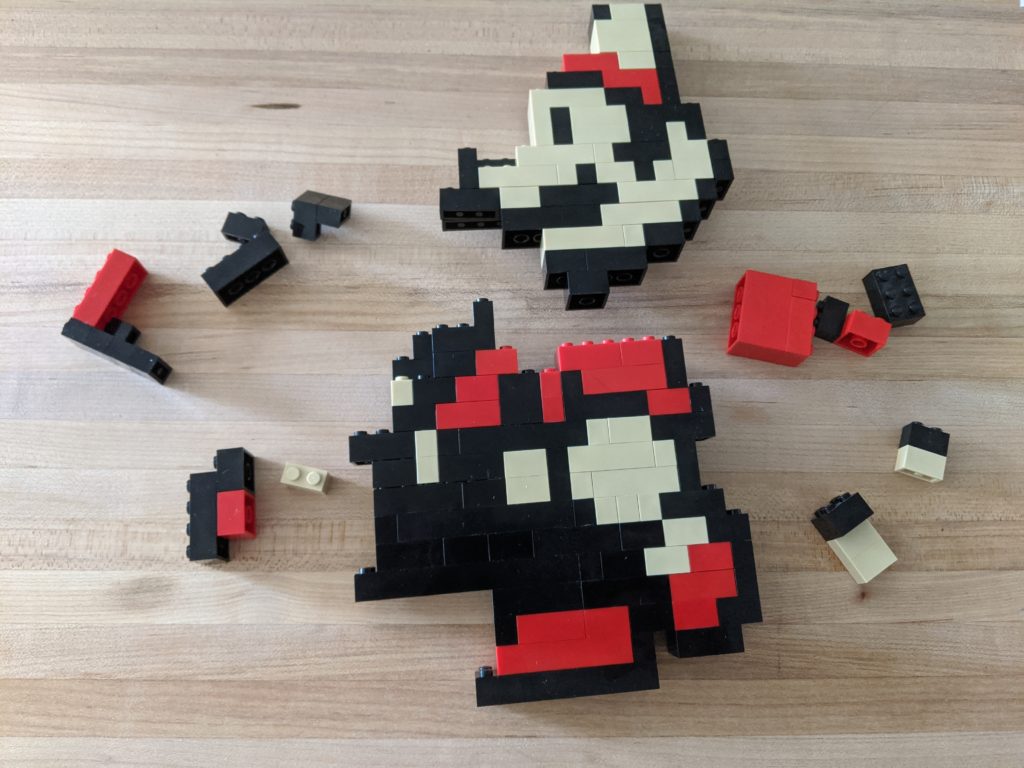